An encounter of a rare kind 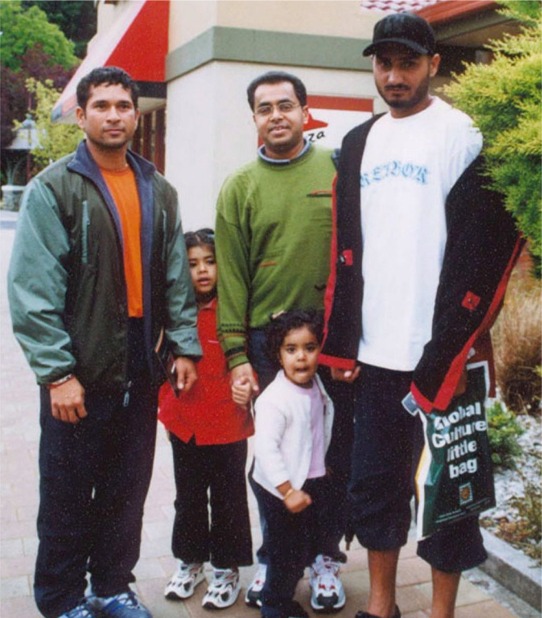 The best part of my New Zealand trip was a chance encounter with none other than Sachin Tendulkar at Queenstown! It was our first day in New Zealand and we(me and my family) were walking on the street doing some window shopping on one evening. Queenstown is small town of about 10,000 people surrounded by mountains which makes the air travel very difficult to the town. I was told that only experienced pilots fly to Queenstown as it is a skillful exercise to navigate through the mountains before landing. India was to play New Zealand(2002-03 series) the fourth ODI the following day, which India eventually lost, I could hear people discussing the match. On the day of the match, all major Newspapers in Queenstown had a special article on Tendulkar. Incidentally, that was the first ever cricket match that was played in this town.

McConnell's is the biggest shopping mall in Queenstown. We had just come out of McConnell's when I noticed two other Indians coming out of the same shopping mall. They caught my attention only because they were the first Indians we saw in NZ. On a casual second look, I recognised the faces of both of them and I couldn't believe my luck! Sachin Tendulkar and Harbhajan Singh! I mean, can you imagine running into Sachin on the streets of Bombay or any other city in India? I hesitated for a moment but ran after them after asking Shyni(my wife) and kids to follow me. I didn't want to miss that golden chance to meet the little genius face to face! I guess Sachin and Bhajji were out to do little souvanir shopping. I ran upto them and requested to pose for a photograph with me which they readily agreed. trip ka paisa vasool on the first day itself :-)

It is amazing the kind of freedom NZ cricketers enjoy in their country. Two days later I was flying to Christchurch from Queenstown and to my luck the entire NZ team was also taking the same flight to Wellington where the fifth ODI was to be played. So I got some images of Stephen Fleming, Andre Adams and some others in my video camera. Although almost everyone at the airport recognised them, they only cast a casual glance at them. Only a few people stared at them. They were left on their own. While team continued their journey to Wellington, I saw Craig McMillan getting off at Christchurch along with us. As I was about to get into my taxi, I saw McMillan approaching my taxi driver(an old lady who looked in her 50s) and talking to her. I was amazed at the casual way of the conversation they had(wonder an Indian cricketer would ever have such a conversation with a taxi driver in India) and thought that probably the lady didn't recognise who she was talking to. As she came back to her seat and started the car, I asked her, "did you realise that you were talking to Craig McMillan?". She said, "Yes. He was asking me to send a message to my company to send him a taxi". And then she added, "His mother is a good friend of mine". I was zapped. McMillan's mother is good friend of this taxi driver? What kind of a life this taxi driver is having? I learned later that many old taxi drivers in New Zealand are actually retired people who run taxi so they have something to do during the day.

As I was wondering what would have happened to an Indian cricketer had he dared to come out of the airport like that, or any public place in India for that matter, the taxi driver radioed the message to her company telling them to send a taxi to pick up McMillan from outside the domestic terminal. When I told her that the entire team was in the same flight as mine and only McMillan deplaned at Christchurch, she explained that he had been dropped from the remainder of the series that morning and he was going to play the domestic matches to regain his form. She also said that it was good move on the part of the national selectors although McMillan didn't look or sound happy when he talked to her. She was talking like an expert!

At Auckland, I ran into the Karnataka trio of Dravid, Srinath and Kumble and took photos with them too. I also watched the 6th d/n match at Auckland on Saturday which India won. It was a heartening sight the standing ovation Sachin received when he came to bat. The whole stadium, regardless of nationality, was on its feet and cheering the moment he stepped into the ground until he reached the crease. Needless to say, he disappointed everyone by scoring just 1 run. An old man whom I sold my wife's ticket(she chose to do shopping while I watched cricket) and was sitting next to me remarked, "I'm totally disappointed". And I said to myself, "a few million people too".

That is the sum total of my cricketing experience in New Zealand.